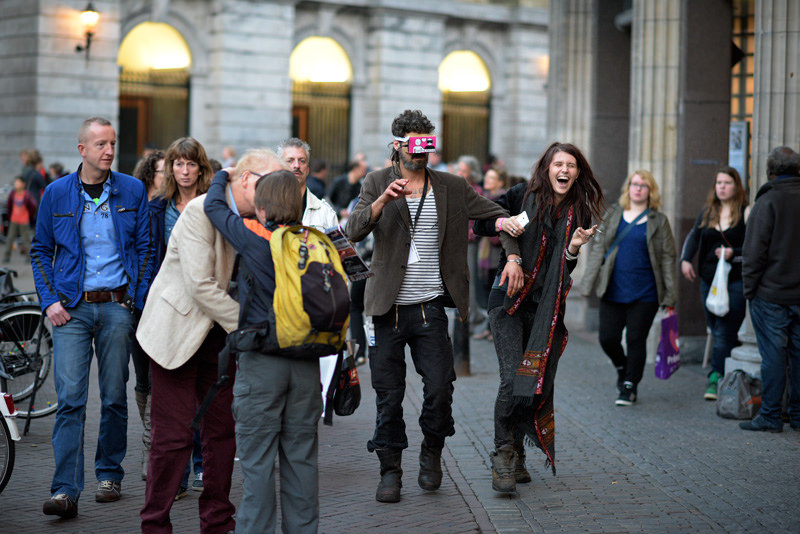 The “Cyborg Dating” project is a co-creation between Sander Veenhof and Rosa Frabsnap, first launched at the Impakt festival in Utrecht in 2014 and recently a version “2.0” was launched at the Ruhr Triennale.

Although VR is increasingly a mobile experience with people being able to move across a room, our participants experienced a walk through physical reality. A set-up that would be impossible to realised based on whatever thinkable sensors, but introducing a human guide enabled this possibility and it was the trigger to further explore a specific genre: “VR4two”.

To turn that into more than just a technical experiment, we came up with a theme and a story that would allow us to give meaning to the format. Going on a date seemed very suitable as a context to encapsulate all aspect into one coherent experience. Our first version consisted of a walk through the city centre of Utrecht, positioned on fixed GPS hotspots. The new version has been turned into a GPS based walk without fixed hotspots. In this version 2.0 we refined our interaction based on the Impakt experience and fore mostly: a storywriter was involved.

The devices participants use and the way of interacting is an integral part of the experience. It is not just the way to experience the story. It -is- our story. The story is about one person wearing a VR headset and another person guiding the clueless person through the physical world. It’s a glimpe into the future. The person wearing the VR headset is partially back in physical reality, coming from a time where all beings have chosen to replace all of their human aspects with digital representations, including their sight and even their mind. For this special occasion, the future being is being teleported back to the present. Halfway the ‘date’, the VR wearable is going from one person to the other, to let the future cyborg see the world anew. To make that into a significant moment, it was important to properly move the participant into his or hre role. We invited each couple to sit down for an automated briefing, listening to a story that would throroughly explain them the context and their role.